Skip to content
Easter is a time of true celebration. I mean, we are talking about the God of the universe loving us so much that He came down to Earth, suffered and died for our sins, and then to make sure everyone noticed He rose from the grave a few days later. Wow. And the best part, all we have to do is say “I do” to Jesus and we’re golden. What’s not to celebrate??

This year I decided to do something really special for Easter. Duck. As you may recall, I once helped process ducks in exchange for free duck (will work for food) but my roast duck was a bad call due to the age of the birds. (The crock pot duck, however, was fantastic!) This year though I proudly paid for a young duckling from Nature’s Harmony Farm, a good recipe and was ready to go.

I pulled the roast duck recipe from Mark’s Daily Apple (yes, I’ve been hanging out with the primal crowd lately) and used the Spice Seasoning and the Orange Honey Sauce. After liberally seasoning, I trussed a duck for the first time (well, any fowl actually). For chickens it doesn’t seem to matter much to me but the duck legs were way out there so I decided to tie him up. It’s actually much easier than it looks. Into the oven the bird went and I focused on my other dishes.

I made some mashed potatoes to please my sweetie, threw together a salad with shallots and red wine vinegar, and got some sugar snap peas ready for a quick saute (sauteed them in bacon fat – heck yeah!) I had some swiss chard from my CSA hanging out in the crisper that had gone pretty wilty on me, so I decided to try a cream of swiss chard soup. Since it turned out really well (test subject Bill even ate the leftovers!) I thought I’d post what I did here:

salt and pepper to taste

Saute onion and chard stems in the butter until soft, then add about 1/2 cup of the stock, cover the pot and simmer until everything is nice and soft. I was busy doing other things, so I probably left mine for 30 to 40 minutes. Add the leaves of the chard and the rest of the stock, and simmer for about 15 minutes. Use a stick blender to puree the soup well, then return to heat and stir in the cream or half and half. Season with salt and pepper to taste.

It didn’t look so attractive, but turned out quite tasty. It doesn’t require a lot of work so it was a good starter course to let simmer while I was handling other important kitchen tasks, like picking out a nice pinot to accompany the duck. Also, I sprinkled some shredded parmesan on the leftovers and that made it even better.

Back to the duck. I had a three pound duck so I shaved some cooking time off of the recipe, which uses a 4 pounder. When I was ready to take its temperature, I discovered that my probe thermometer was broken. Great! So I used a grilling fork that has a thermometer built in that someone gave us once. It said it was 10 degrees short of done, so I stuck the bird back in for a while, pulled it and measured again. 3 degrees short. At this point I am convinced the hand-me-down grilling fork had a reason for being given away, because this duck is DONE.

I let the duck rest, finished prepping everything else and set the table. For everything I did (5 dishes) it was two hours from pulling stuff out of the fridge to table service. Not bad for a celebration feast! The duck did end up a tad overdone due to my faulty thermometers so I went online and bought this one

yesterday since I pitched the useless probe thermometer immediately. 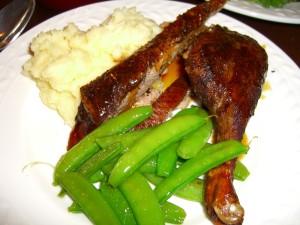 Everything turned out well, the orange sauce was delicious on the flavorful duck, and I spent a nice meal at the table (wow!) with my sweetie. Reasons to celebrate abound!

Writer, Toastmaster and tireless champion for the benefits of a ketogenic diet! View more posts

One thought on “Easter Celebration Feast”