Skip to content
Welcome to the frozen new year! I know I have been delinquent in recent months. The fall semester started and apparently zapped all my energy. Trust me, I would have rather been cooking and blogging than doing multivariate statistics.

A couple years ago I procured a yogurt maker. I know Alton Brown would disapprove of this unitasker, but I like it. It’s convenient, simple and has those little individual containers that are both functional and cute. I used it several times with success. However, a few of the jars came out really separated and funky looking the last time I did it. I’m not sure why. So I successfully made yogurt cheese (more on that below) with the suspect containers.

But being me, I had to try making yogurt a different way. I mean, what if my maker broke?  So I found a recipe in my trusty copy of Nourishing Traditions. The recipe called for using a dehydrator to warm the milk, but I was disinclined to purchase a dehydrator. After consulting with some of the helpful folks on one of my real foods Yahoo groups, I came up with and executed a plan.

I warmed a quart of whole milk on my gas oven to just barely 110 degrees. I stirred together in a quart sized wide mouthed Mason jar (I love those things) a few tablespoons of warm milk and a big tablespoon of purchased whole milk yogurt. I poured the rest of the milk into the jar, lidded it, and stuck it in the oven which had been preheated to about 200 degrees. I shut the oven off and turned on the oven light. Then I said a small prayer and left it overnight.

After about 12 hours, I opened the oven. With high anxiety, I reached in and grabbed my jar. It was suprisingly warm for the oven having been off for half a day. The oven light really does a good job of keeping it just warm enough. I was relieved. It didn’t taste half bad, either. I enjoyed it over a number of days with raspberries and a little granola that I picked up at the farmer’s market. 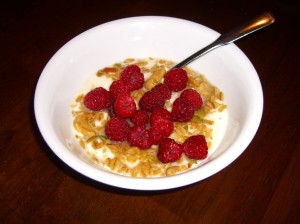 I read somewhere that the longer yogurt “cooks” the more the cultures eat the carbohydrates in the milk. Therefore, the longer you leave it in the warmth the fewer carbs you will have in your final product. Since I was trying to trim a pound or two a decided to do the same thing again but this time I left it for 18 hours instead of 12. It turned out about the same looking and tasting. If it had fewer carbs I’ll never know, but I took another step toward diet yogurt by making yogurt cheese.

I poured the yogurt into a strainer covered with cheese cloth over a bowl and let it drain for three or four hours. Then I tied up the cheese cloth around the handle of a spoon, ditched the strainer and let it hang in the pitcher until it had drained off all the whey (apparently a source of carbs). I squeezed it out a little bit and the resulting chunk of cheese kind of had the consistency cross between ricotta and goat cheese. Firmer than ricotta, but not as solid as goat cheese.

Being quite proud of myself, I added the yogurt cheese to my morning eggs in little dallops for about two weeks. It was creamy and satisfying. I salted it upon use, but you could probably stir in some salt when you put it in the fridge. That might even prolong its fridge life.

I later tried the same process with a larger batch and I think I either didn’t provide sufficient surface area for the draining or it was just really liquidy and I didn’t drain it long enough because it didn’t drain well at all. It ended up looking like thick store-bought yogurt. Not really a problem, but when I tasted it, it was quite sour…quite a bit like sour cream. So I proceeded to use it like sour cream for about three or four weeks. Awesome! Serendipity! I assume you could do the same thing by just draining the would-be yogurt cheese for a shorter period of time.

So I made yogurt (two different ways), yogurt cheese and yogurt sour cream. Who knew milk gone bad could produce such smashing results? Now to try it with goat milk…

Writer, Toastmaster and tireless champion for the benefits of a ketogenic diet! View more posts